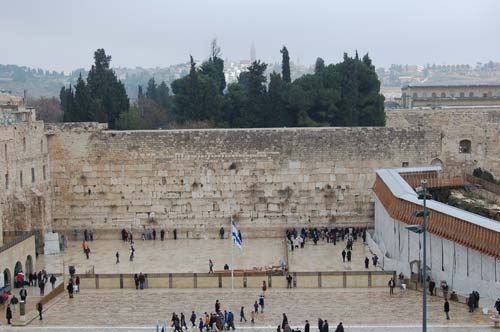 The lower courses of this limestone wall were laid by the authority of King Herod. It was a retaining wall to make a level platform for the Roman era Jewish Temple. 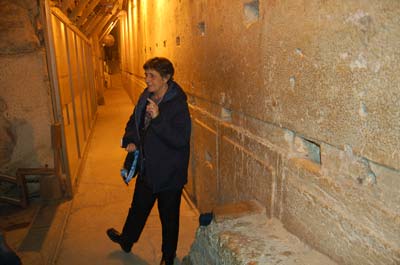 The Israeli Antiquities Authority dug the tunnel in the photo to the footers of the Western Wall north of the place of prayer.

The temple was the center for the sacrificial cult. Some of the prophets before Jesus had spoken against this form of worship:

Isaiah 1:11-18 (WEB) “What are the multitude of your sacrifices to me?”, says Yahweh. “I have had enough of the burnt offerings of rams, and the fat of fed animals. I don’t delight in the blood of bulls, or of lambs, or of male goats. 12 When you come to appear before me, who has required this at your hand, to trample my courts? 13 Bring no more vain offerings. Incense is an abomination to me; new moons, Sabbaths, and convocations: I can’t bear with evil assemblies. 14 My soul hates your New Moons and your appointed feasts. They are a burden to me. I am weary of bearing them. 15 When you spread out your hands, I will hide my eyes from you. Yes, when you make many prayers, I will not hear. Your hands are full of blood. 16 Wash yourselves, make yourself clean. Put away the evil of your doings from before my eyes. Cease to do evil. 17 Learn to do well. Seek justice. Relieve the oppressed. Judge the fatherless. Plead for the widow.” 18 “Come now, and let us reason together,” says Yahweh: "Though your sins be as scarlet, they shall be as white as snow. Though they be red like crimson, they shall be as wool.

Psalm 40:6-10 (WEB) Sacrifice and offering you didn’t desire. You have opened my ears. You have not required burnt offering and sin offering. 7 Then I said, “Behold, I have come. It is written about me in the book in the scroll. 8 I delight to do your will, my God. Yes, your law is within my heart.” 9 I have proclaimed glad news of righteousness in the great assembly. Behold, I will not seal my lips, Yahweh, you know. 10 I have not hidden your righteousness within my heart. I have declared your faithfulness and your salvation. I have not concealed your loving kindness and your truth from the great assembly.

Psalm 51:15-18 (WEB) Lord, open my lips. My mouth shall declare your praise. 16 For you don’t delight in sacrifice, or else I would give it. You have no pleasure in burnt offering. 17 The sacrifices of God are a broken spirit. A broken and contrite heart, O God, you will not despise. 18 Do well in your good pleasure to Zion. Build the walls of Jerusalem.

Hosea 6:6 (WEB) For I desire mercy, and not sacrifice; and the knowledge of God more than burnt offerings.

Jesus may have been referring to Hosea as recorded in Matthew 9:10-13 (WEB) 10 As he sat in the house, behold, many tax collectors and sinners came and sat down with Jesus and his disciples. 11 When the Pharisees saw it, they said to his disciples, “Why does your teacher eat with tax collectors and sinners?” 12 When Jesus heard it, he said to them, “Those who are healthy have no need for a physician, but those who are sick do. 13 But you go and learn what this means: ‘I desire mercy, and not sacrifice,’ for I came not to call the righteous, but sinners to repentance.”

In Matthew, Mark, Luke, and John there are records of Jesus going into the temple and casting out those selling sacrificial animals and money changers.

Mark 11:15-17 (WEB) They came to Jerusalem, and Jesus entered into the temple, and began to throw out those who sold and those who bought in the temple, and overthrew the tables of the money changers, and the seats of those who sold the doves. 16 He would not allow anyone to carry a container through the temple. 17 He taught, saying to them, “Isn’t it written, ‘My house will be called a house of prayer for all the nations?’ But you have made it a den of robbers!”

During the Byzantine Era Christians abolished the ritual sacrifice of animals and the worship of Greco-Roman idols. According to Josephus', Antiquities of the Jews Book XX, Chapter 9, vs. 7; about 6-7 years before the temple was destroyed construction of the temple was completed: "7. And now it was that the temple was finished. So when the people saw that the workmen were unemployed, who were above eighteen thousand and that they, receiving no wages, were in want because they had earned their bread by their labors about the temple; and while they were unwilling to keep by them the treasures that were there deposited, out of fear of [their being carried away by] the Romans; and while they had a regard to the making provision for the workmen; they had a mind to expend these treasures upon them; for if any one of them did but labor for a single hour, he received his pay immediately; so they persuaded him to rebuild the eastern cloisters. These cloisters belonged to the outer court, and were situated in a deep valley, and had walls that reached four hundred cubits [in length], and were built of square and very white stones, the length of each of which stones was twenty cubits, and their height six cubits. This was the work of king of the temple committed to him by Claudius Caesar, considering that it is easy to demolish any building, but hard to build it up again, and that it was particularly hard to do it to these cloisters, which would require a considerable time, and great sums of money, he denied the petitioners their request about that matter; but he did not obstruct them when they desired the city might be paved with white stone. He also deprived Jesus, the son of Gamaliel, of the high priesthood, and gave it to Matthias, the son of Solomon, who first of all built the entire temple. But king Agrippa, who had the care Theophilus, under whom the Jews' war with the Romans took its beginning."

There was much gold decoration used in the temple. The Romans surrounded Jerusalem preventing aid from reaching her and eventually breached the defenses and set fire to the city. According to Josephus the temple was burned. The gold of the temple melted and flowed into places between the stones. The Romans had the stones torn down in order to try to find gold. Not one stone was left upon another stone.