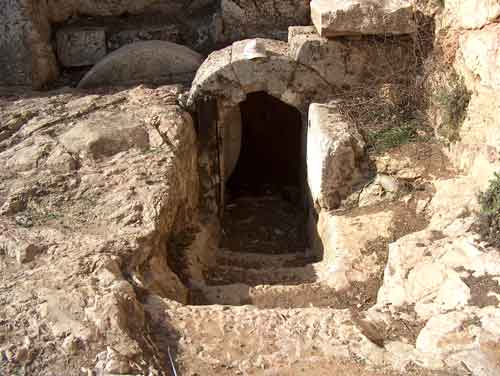 This tomb has been identified as the Herod family tomb. Herod died about 4 B.C. and probably was not buried in his family's tomb. The tomb is located outside the Jaffa Gate of the Old City in a park between the windmill and the King David Hotel.

Queen Helena of Adiabene tomb, "Tomb of the Kings", April 2005

This tomb was constructed about 50 A.D. by a Queen who converted to Judaism and then moved to Jerusalem. It is located near the American Colony Hotel, in Jerusalem, near the city center. 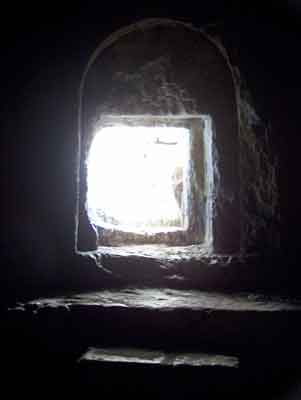 Inside the Queen Adiabene tomb, April 2005

Inside the tomb was a large room. It was big enough to walk around in. In two of the walls were three burial niches intended for the queen and her two sons. 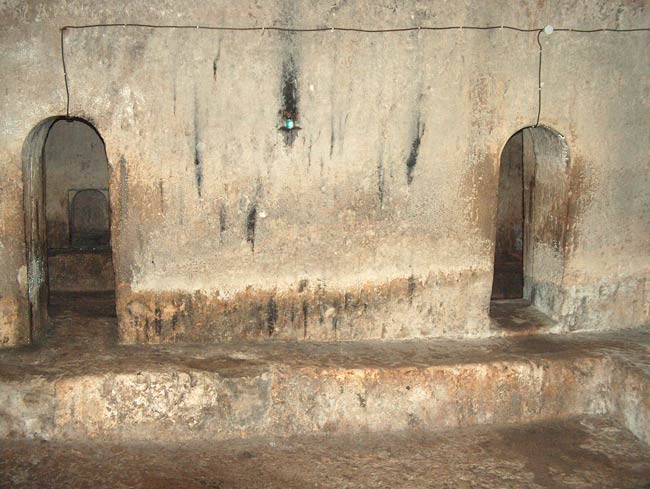 First century tombs have been found with their outer entrances sealed with blocking stones to prevent hyenas and jackals from disturbing the remains of loved ones. Some tombs were sealed with square or rectangular stones, others with slightly rounded or near perfectly rounded stones. The Gospel indicates Jesus was buried in a tomb with a stone rolled across the entrance, but he did not stay there long.

Mark 16:1 (WEB) When the Sabbath was past, Mary Magdalene, and Mary the mother of James, and Salome, bought spices, that they might come and anoint him. 2 Very early on the first day of the week, they came to the tomb when the sun had risen. 3 They were saying among themselves, “Who will roll away the stone from the door of the tomb for us?” 4 for it was very big. Looking up, they saw that the stone was rolled back.

John 20:1 (WEB) Now on the first day of the week, Mary Magdalene went early, while it was still dark, to the tomb, and saw the stone taken away from the tomb. 2 Therefore she ran and came to Simon Peter, and to the other disciple whom Jesus loved, and said to them, “They have taken away the Lord out of the tomb, and we don’t know where they have laid him!” 3 Therefore Peter and the other disciple went out, and they went toward the tomb. 4 They both ran together. The other disciple outran Peter, and came to the tomb first. 5 Stooping and looking in, he saw the linen cloths lying, yet he didn’t enter in. 6 Then Simon Peter came, following him, and entered into the tomb. He saw the linen cloths lying, 7 and the cloth that had been on his head, not lying with the linen cloths, but rolled up in a place by itself. 8 So then the other disciple who came first to the tomb also entered in, and he saw and believed. 9 For as yet they didn’t know the Scripture, that he must rise from the dead. 10 So the disciples went away again to their own homes. 11 But Mary was standing outside at the tomb weeping. So, as she wept, she stooped and looked into the tomb, 12 and she saw two angels in white sitting, one at the head, and one at the feet, where the body of Jesus had lain. 13 They told her, “Woman, why are you weeping?” She said to them, “Because they have taken away my Lord, and I don’t know where they have laid him.” 14 When she had said this, she turned around and saw Jesus standing, and didn’t know that it was Jesus. 15 Jesus said to her, “Woman, why are you weeping? Who are you looking for?” She, supposing him to be the gardener, said to him, “Sir, if you have carried him away, tell me where you have laid him, and I will take him away.” 16 Jesus said to her, “Mary.” She turned and said to him, “Rabboni!” which is to say, “Teacher!” 17 Jesus said to her, “Don’t hold me, for I haven’t yet ascended to my Father; but go to my brothers, and tell them, ‘I am ascending to my Father and your Father, to my God and your God.’” 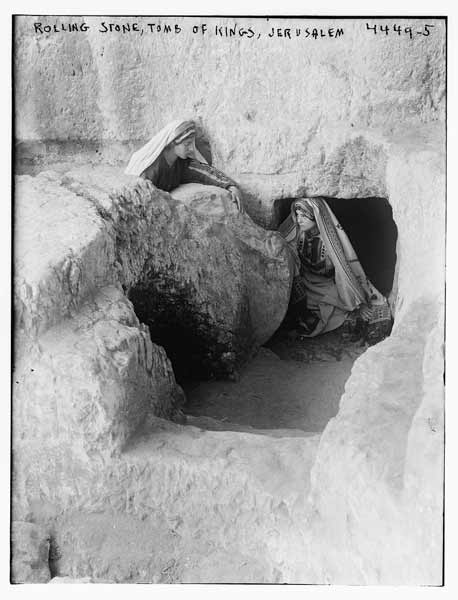 Isaiah 26:16 (WEB) Many of those who sleep in the dust of the earth shall awake, some to everlasting life, and some to shame and everlasting contempt. 3 Those who are wise shall shine as the brightness of the expanse; and those who turn many to righteousness as the stars forever and ever.

Daniel 12:2-3 (WEB) Many of those who sleep in the dust of the earth shall awake, some to everlasting life, and some to shame and everlasting contempt. 3 Those who are wise shall shine as the brightness of the expanse; and those who turn many to righteousness as the stars forever and ever.

1 Kings 17:17-24 (WEB) After these things, the son of the woman, the mistress of the house, became sick; and his sickness was so severe that there was no breath left in him. 18 She said to Elijah, “What have I to do with you, you man of God? You have come to me to bring my sin to memory, and to kill my son!” 19 He said to her, “Give me your son.” He took him out of her bosom, and carried him up into the room where he stayed, and laid him on his own bed. 20 He cried to Yahweh, and said, “Yahweh my God, have you also brought evil on the widow with whom I am staying, by killing her son?” 21 He stretched himself on the child three times, and cried to Yahweh, and said, “Yahweh my God, please let this child’s soul come into him again.” 22 Yahweh listened to the voice of Elijah; and the soul of the child came into him again, and he revived. 23 Elijah took the child, and brought him down out of the room into the house, and delivered him to his mother; and Elijah said, “Behold, your son lives.” 24 The woman said to Elijah, “Now I know that you are a man of God, and that Yahweh’s word in your mouth is truth.”