The late ripening fig of September at Tel Lakish (Sept 2003)

This fig was turning purple as it ripened and was quite likely very juicy and sweet.

The fig tree was a favorite of Bible authors. This tree was one of the most productive of fig trees I observed in all of Israel for this time of year. The productivity of this tree seemed to be influenced by the amount of care given to it. It was in the "Birds of Prey" outdoor aviary of the zoo. The tree may have received extra water and fertilizer. At a minimum it got extra bird dung.

Luke 13:6 (WEB) He spoke this parable. “A certain man had a fig tree planted in his vineyard, and he came seeking fruit on it, and found none. 7 He said to the vine dresser, ‘Behold, these three years I have come looking for fruit on this fig tree, and found none. Cut it down. Why does it waste the soil?’ 8 He answered, ‘Lord, leave it alone this year also, until I dig around it, and fertilize it. 9 If it bears fruit, fine; but if not, after that, you can cut it down.’” 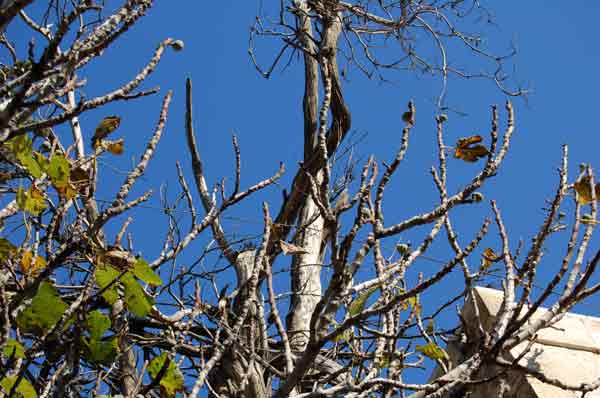 In the winter the fig lost its leaves. This fig tree had a few leaves remaining in January; whereas other local fig trees had lost all their leaves by this time. There were a few figs from the last growth that remained on the branches while the tree shut down for winter.

In the Gospel of Luke Jesus was teaching his disciples on the evening/night of the day of preparation for the Passover and was speaking about things to come:. In Luke 21:25 He concluded: There will be signs in the sun, moon, and stars; and on the earth anxiety of nations, in perplexity for the roaring of the sea and the waves; 26 men fainting for fear, and for expectation of the things which are coming on the world: for the powers of the heavens will be shaken. 27 Then they will see the Son of Man coming in a cloud with power and great glory. 28 But when these things begin to happen, look up, and lift up your heads, because your redemption is near.” 29 He told them a parable. “See the fig tree, and all the trees. 30 When they are already budding, you see it and know by your own selves that the summer is already near. 31 Even so you also, when you see these things happening, know that God’s Kingdom is near.

Online Guide to Growing Figs in the Southern U.S.