Casting Out a Demon

At Qumran there were first century parchment and papyri scrolls found. These are known as the Dead Sea Scrolls. A scroll from Cave 4 is a record of early Jewish efforts to rebuke a demon. In text 4Q560 "... fever demon, chills demon, chest demon", was commanded to not disturb at night with disturbing dreams, (The Dead Sea Scrolls, M. Wise, © 1996). 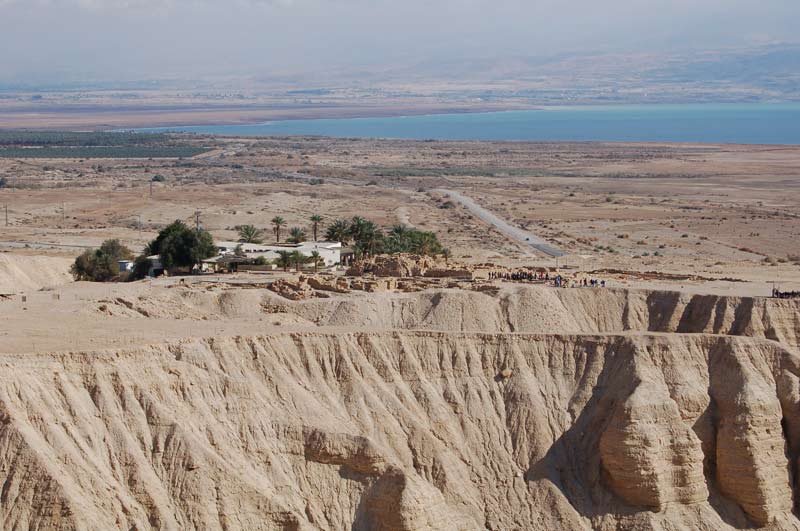 Qumran Settlement near the side of the Dead Sea -- 2006

The ancient Persians had Zoroastrian writings about the powers of light and darkness; it was the good God versus the evil leader of the demons.

The idea of a good and bad spirit is preserved in the Bible in the Book of Job; a discourse including a tale of God and Satan debating the loyalty of Job.

In Jesus' day hallucinations, disorderly conduct, physical or neurological disorders, and bad behaviors were attributed to demons. The book of Job described Satan as a spirit of temptation and evil. It is obvious that a demon of shaking and fever was a metaphor for a disease like malaria. Jesus was able to make people well and to rid them of bad conditions. The word Satan was used metaphorically in the Bible.

Matthew 12:27 (WEB) If I by Beelzebul cast out demons, by whom do your children cast them out? Therefore they will be your judges.

Many of the people rejected Jesus accusing him of being able to cure people with strange mental and physical disorders by being in collusion with the devil. Jesus responded with words to the effect that it was not by the devil that the devil was cast out, for the devil does not cast out its own. Some went to their traditional religious leaders to try to get divine intervention, however Jesus was drawing crowds by the thousands and many were going to him for he had authority instead of pretending to be someone great.

At the Golan Archaeology Museum in Qatzrin there is a Byzantine Period Jewish exorcism prayer in Hebrew on a silver amulet invoking the name of God (Yahu) to drive the fever/shivers (malaria?) and demons from Yaitha; the daughter of Marian. Fever/shivers is a symptom of malaria. The 5th-6th century amulet was found at Horvat Kanaf in the Golan where Judaism flourished under the Christian Byzantine empire.

Matthew 8:14 (WEB) When Jesus came into Peter’s house, he saw his wife’s mother lying sick with a fever. 15 He touched her hand, and the fever left her. She got up and served him. 16 When evening came, they brought to him many possessed with demons. He cast out the spirits with a word, and healed all who were sick;

In this case fever was a sickness that required healing and not a demon to be driven out.