View to the south of Kursi Christian Church and Noqeib, July 2006

The point of land at Noqeib is where the shore is steepest and the closest to the lake in this part of Galilee, however the drop off from the bank to the bottom of the lake is steeper below Kursi where the Wadi Semakh empties into the lake. Nineteenth century travelers reported this as the likely location of the story of the demoniac and the swine. See Israel Photos IV -- https://dqhall59.com/israelphotosIV/kursi.htm 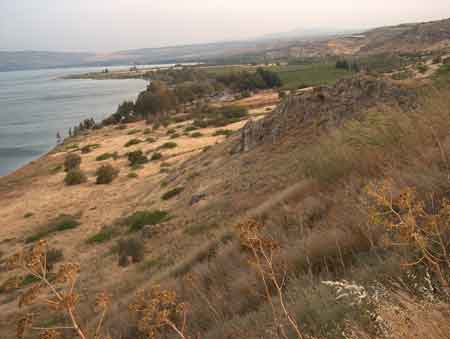 View of Noqeib ridge above beach - 2005, looking back north to Kursi to right of peninsula

This steep slope between Kursi and En Gev may have appeared different two thousand years ago, as soil has washed down the slope in the meantime.

When I was a boy my father told me about lemmings. These are a type of rat that has a habit of mass hysteria. They stampeded themselves into the water and continued to swim away from the shore, then died drowning. I compared this to the testimony about the demon possessed man who explained he had a legion of demons within himself when Jesus asked him who he was. A legion was several thousand soldiers. The man was being tormented; a madman who had been restrained and had broken out of his captivity. He had been reduced to homeless wandering living in open spaces or tombs as shelter from the wind and cold of the predawn morning. Jesus healed the man. According to the story the demons left the man and forced or frightened the pigs to run into the lake. The Gospel account signified the existence of evil powers in the world and the perseverance of God to overcome the evil and to give hope to sinners. I doubt the testimony about the demon possessed man and the pigs. I do not understand the meaning of the demons leaving a man and doing damage to a herd of pigs. I am aware people did things to harm others and blamed it on demons. I am aware unexplained malicious activity was attributed to demons. 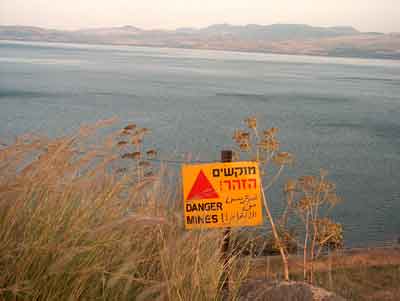