Photos of the Region of Caesarea Philippi

Mark 8:27 (WEB) Jesus and his disciples went on to the villages around Caesarea Philippi. On the way he asked them, "Who do people say I am?" 28 They replied, "Some say John the Baptist; others say Elijah; and still others, one of the prophets." 29 "But what about you?" he asked. "Who do you say I am?" Peter answered, "You are the Christ" 30 Jesus warned them not to tell anyone about him.

Mark 9:2 (WEB) After six days Jesus took with him Peter, James, and John, and brought them up onto a high mountain privately by themselves, and he was changed into another form in front of them. 3 His clothing became glistening, exceedingly white, like snow, such as no launderer on earth can whiten them. 4 Elijah and Moses appeared to them, and they were talking with Jesus. 5 Peter answered Jesus, “Rabbi, it is good for us to be here. Let’s make three tents: one for you, one for Moses, and one for Elijah.” 6 For he didn’t know what to say, for they were very afraid. 7 A cloud came, overshadowing them, and a voice came out of the cloud, “This is my beloved Son. Listen to him."

After Jesus, Peter, James, and John descended from the mountain:

Matt. 17:14 (WEB) When they came to the multitude, a man came to him, kneeling down to him, saying, 15 “Lord, have mercy on my son, for he is epileptic, and suffers grievously; for he often falls into the fire, and often into the water. 16 So I brought him to your disciples, and they could not cure him.” 17 Jesus answered, “Faithless and perverse generation! How long will I be with you? How long will I bear with you? Bring him here to me.” 18 Jesus rebuked him, the demon went out of him, and the boy was cured from that hour. 19 Then the disciples came to Jesus privately, and said, “Why weren’t we able to cast it out?” 20 He said to them, “Because of your unbelief. For most certainly I tell you, if you have faith as a grain of mustard seed, you will tell this mountain, ‘Move from here to there,’ and it will move; and nothing will be impossible for you. 21 But this kind doesn’t go out except by prayer and fasting.”

Compare Jesus' statement about faith to that of Cicero who lived in the first century B.C.:
"And therefore we may follow the Stoics, who diligently investigate the etymology of words; and we may accept their statement that "good faith" is so called because what is promised is "made good," from Cicero, De Officiis, Book I.

Both Matthew and Mark agreed Jesus was in the villages of the region of Philip's capitol city Caesarea Philippi (at the base of Mt. Hermon) before the transfiguration and after the transfiguration they went back to Galilee. Luke described that Jesus went with his disciples to the mount of transfiguration after the feeding of the five thousand. In John 6:4 the feeding of the five thousand happened close to the time of the Passover and in John 6:10 there was plenty of grass in that place.

From the summit of Mt. Hermon one might see the Mediterranean Sea.

This photo is a view from the summit, early 20th century; with the Mediterranean Sea near Tyre in view. Supposedly the Old Testament prophet Elijah stayed with a widow of Zerapheth during a famine. Zarapheth was the next major town south of Tyre. Jesus went to Tyre and was begged by a Syro-Phoenician woman to heal her daughter (Mark 7:24-30). People from Tyre and Sidon were going to Jesus in Galilee as they heard reports of him (Mark 3:8). Sidon is in Lebonan 25 miles north of Tyre.

There is an ancient Catholic tradition indicating the Mount of Transfiguration is Mt. Tabor. This was passed on to us from Jerome. 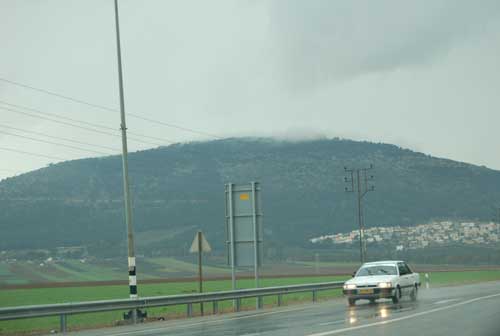