A FIRST CENTURY SYNAGOGUE AT GAMALA 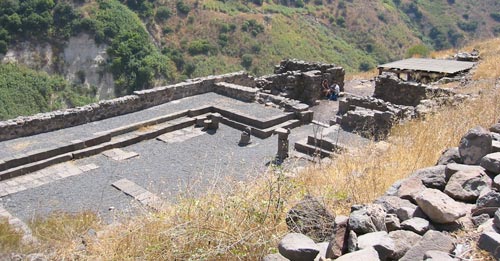 Jesus taught in the synagogues of Galilee. The above photo is of an Israel Antiquities Authority restored synagogue with a couple of hikers sitting in the entrance to the synagogue at Gamala in the Golan Hieghts above the NE shore of the Sea of Galilee a few miles from the ruins of Bethsaida. The first century Roman-Jewish historian Flavius Josephus recorded the siege and destruction of Gamala during the Jewish uprising that lasted from 66-70 in the greater part of Israel and until 74 AD at Masada.

Josephus also wrote about Jesus Christ as a doer of good works in his book Antiquities of the Jews, Book XVIII, Chapter III

"Now there was about this time Jesus, a wise man, if it be lawful to call him a man; for he was a doer of wonderful works, a teacher of such men as receive the truth with pleasure. He drew over to him both many of the Jews and many of the Gentiles. He was [the] Christ. And when Pilate, at the suggestion of the principal men amongst us, had condemned him to the cross, those that loved him at the first did not forsake him; for he appeared to them alive again the third day; as the divine prophets had foretold these and ten thousand other wonderful things concerning him. And the tribe of Christians, so named from him, are not extinct at this day."

Josephus' descriptions of Gamala and Masada were proven to be based on fact. Gamala is a name based on the pronunciation of the Aramaic word for camel -- gamal. Gamala was built on a hump back ridge.