JESUS TEACHING ON THE MOUNTAIN

This ridge in the photo above extended from the Tzelon/Zelon Beach in the south to Ramot/Kinnar Beach almost two kilometers to the north.

This amphitheater shaped ravine above Tzelon Beach may have seated thousands. Sound traveled through a hollow without being diminished. The crowd was sitting on the green grass (Mark 6), about the time of the Passover (John 6). 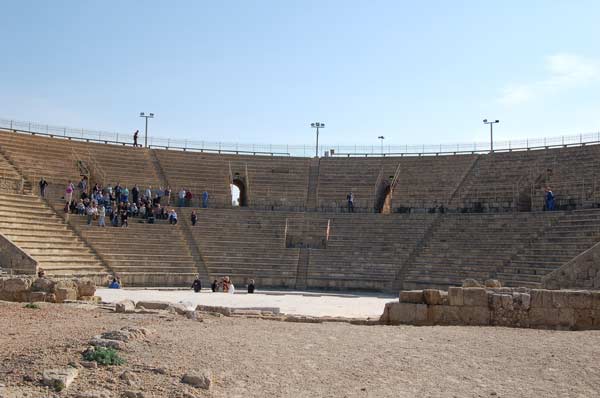 This is the reconstructed theater at Caesarea Maritima south of Haipha. I was reading the tourist pamphlet describing the site and learned this theater seated 4000 people.; Caesarea was founded by Herod during Roman times as he disliked the harbor at Joppa (Yafo).

Mark 6:34 (WEB) 34 Jesus came out, saw a great multitude, and he had compassion on them, because they were like sheep without a shepherd, and he began to teach them many things. 35 When it was late in the day, his disciples came to him, and said, “This place is deserted, and it is late in the day. 36 Send them away, that they may go into the surrounding country and villages, and buy themselves bread, for they have nothing to eat.” 37 But he answered them, “You give them something to eat.” They asked him, “Shall we go and buy two hundred denarii[a] worth of bread, and give them something to eat?” 38 He said to them, “How many loaves do you have? Go see.” When they knew, they said, “Five, and two fish.” 39 He commanded them that everyone should sit down in groups on the green grass. 40 They sat down in ranks, by hundreds and by fifties. 41 He took the five loaves and the two fish, and looking up to heaven, he blessed and broke the loaves, and he gave to his disciples to set before them, and he divided the two fish among them all.

As the sky darkened, Jesus sent his disciples away in a boat and went up on a mountain to hide from those seeking to take him and force him to be king according to their terms. 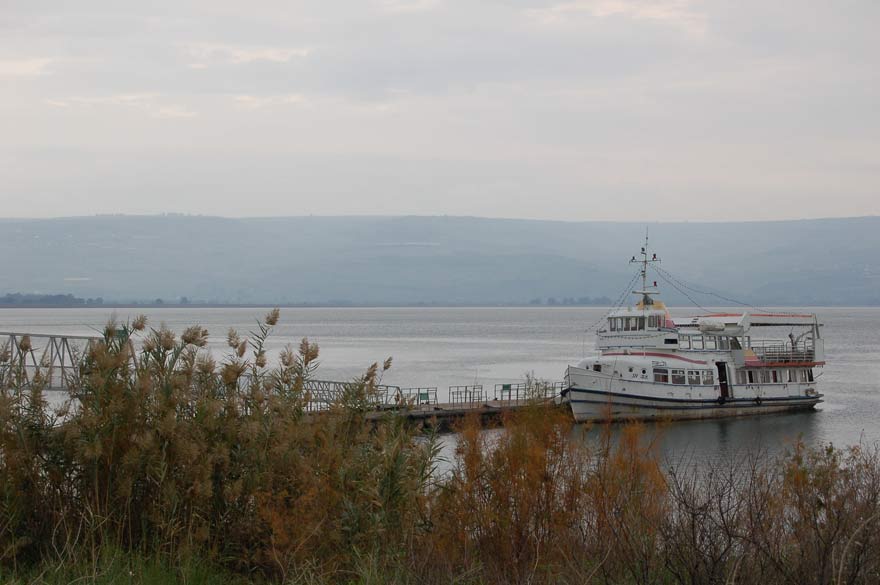 This is the view from the W. Capernaum boat landing. The view is across to the mountains of the Golan. The edge of the Bethsaida, Jordan River delta/plain is seen along the upper left shore. Numerous streams deposited sediment on the plain as they meandered toward the lake. 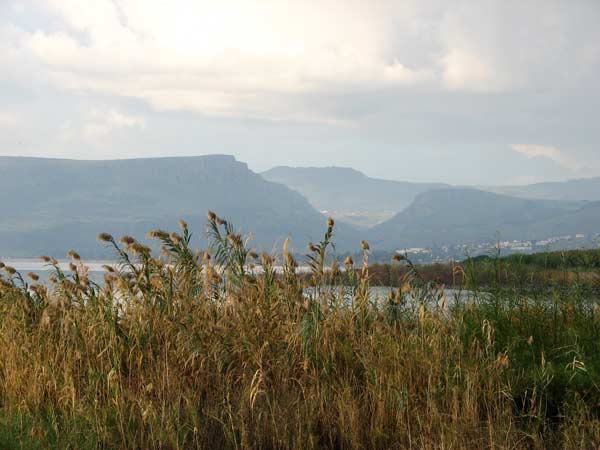 This is the view from the parking lot at Capernaum. To the left of the notch was where the plain some called Ginosar intersected the slope of the cliffs below Arbel.