OVERLOOKING THE POOL OF SILOAM AT JERUSALEM 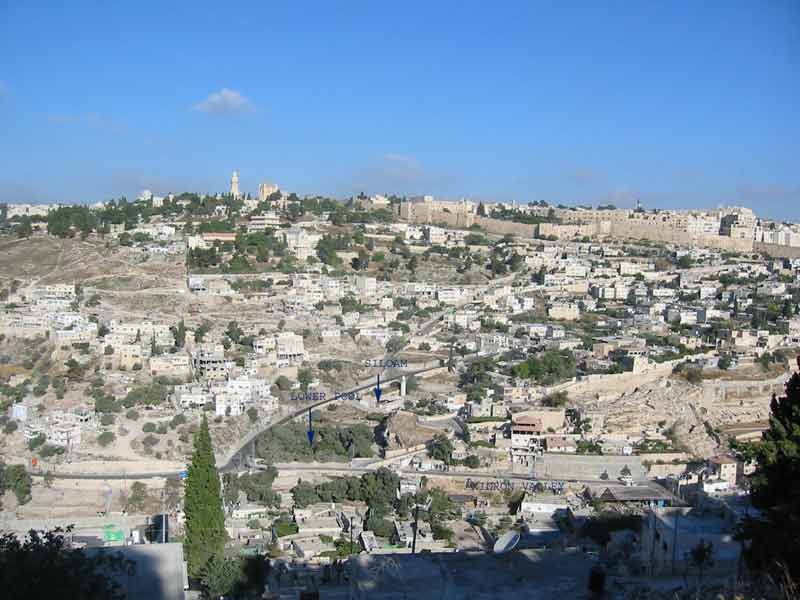 View of Siloam from the Mt. of Offense (Sept. 2003) Dark Blue Arrows Pointing to Area of Ancient Pools Near Lower Center

John 9:11 (WEB) He answered, “A man called Jesus made mud, anointed my eyes, and said to me, ‘Go to the pool of Siloam, and wash.’ So I went away and washed, and I received sight.”

The tunnel of Hezekiah discharged its water to the Byzantine Pool of Siloam. In 2005 the Herodian pool of Siloam was uncovered in the area indicated as the Lower Pool in the photo. It was where a blind man was healed after following Jesus' instructions. Directly below the arrow at the Pool of Siloam there was a cliff at the brow of a hill and the water from the pool flowed out of the pool past the lower pool where there was a garden of figs and pomegranates. Eventually the stream flowed into a city pipe under the street. The Kidron Valley was at the bottom of the photo above). Quarrying during Roman times changed the shape of the lower city; especially in the area to the right of Siloam. It was there that the quarrying exposed some tombs thought to be the tombs of Judean kings.

The Bordeaux Pilgrim visited this area circa 333 AD. He wrote the following: "Also as you come out of Jerusalem to go up Mount Sion, on the left hand, below in the valley, beside the wall, is a pool which is called Siloe and has four porticoes; and there is another large pool outside it."

The lower pool was rediscovered in 2005 during some sewer construction and found to be the Roman era Pool of Siloam from the times of Jesus.