SALT OF THE EARTH

Matthew 5:13 (WEB) “You are the salt of the earth, but if the salt has lost its flavor, with what will it be salted? It is then good for nothing, but to be cast out and trodden under the feet of men.

Along the shore of the Dead Sea the water evaporated and crusts of salt formed on the shore and on the shallow lake bottom. Inland, far from the salty seas, salt was of great value as it is an important mineral supplement. King Herod traded salt. He had built forts on both sides of the Dead Sea.  Some Roman soldiers were paid partially in salt rations; it was their salary, taken from the Roman words sal dare, “to give salt.” Salt was used to preserve fish and meat.

While salt is a valuable commodity; excessive salt intake is linked to high blood pressure as salt makes the body retain water. Some high blood pressure is caused by a cholesterol/plaque buildup in the arteries often accompanying obesity due to bad dietary choices or as a hereditary condition. Some processed foods contain elevated amounts of sodium; more than in raw fruits and vegetables.

In ancient Mesopotamia, along the Tigris and Euphrates Rivers, canal and ditch irrigation methods were used to grow wheat and barley. In time evaporation of water from the flooded fields deposited enough salt to render the ground useless. The farmers had to move to cultivate new ground. Eventually the fallow salted fields were "healed" by the infrequent winter rains or times of catastrophic flooding.

Too much salt is useless whether in one's body or in a farmer's field.

Cubic crystals of salt formed on a rock, January 2005 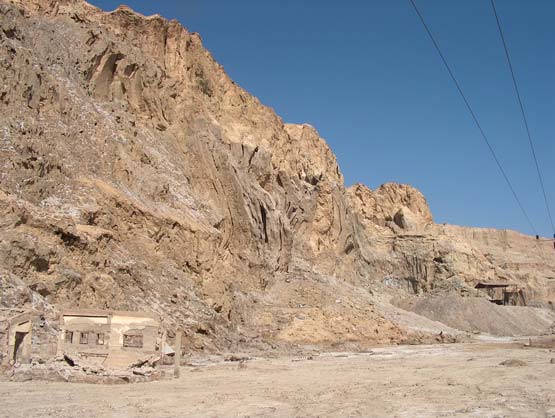 This is a photo of Mt. Sodom between Masada and the Dead Sea Salt Works factory at the southern end of the Dead Sea in Israel.  There are nearly vertical layers of salt rock visible between the abandoned house and the open face salt mine to the right. Salt is less dense than most rocks and over the course of millions of years rose through denser rock units to form salt domes in offshore oil fields, thus these layers have have pushed into near vertical form. Rocks bent when pressure was applied over the course of millions of years; even though they are brittle over the short term.

Rock salt (NaCl) is the mineral halite. There is also potassium salt in this area called potash.