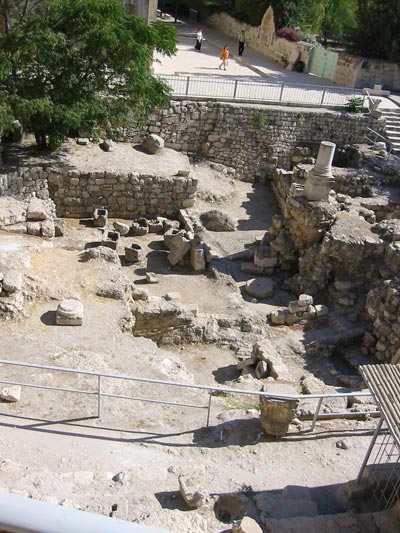 The small pools or baths were built from 150 BC to 70 AD. (Hasmonean to Roman times). Since the area was Jewish at the time, these may have been built for use as mikvehs. The Romans thought that warm baths might cause healing. The Jewish historian Josephus described a rival of his who sought permission to go to the hot springs of Tiberias to try to get healed (before 70 AD). Between 200-400 AD a temple of Aesclepius (Greek god of healing), or perhaps Serapis, was built with mosaics and frescos around part of the bath area. During this period the Romans did not allow Jews to enter Jerusalem. Jewish culture was yet active in Galilee. The site of Jesus healing the paralytic might have been at one of the larger pools shown on the next page if not a smaller medicinal pool used as mikvehs during Jewish times.

1 After these things, there was a feast of the Jews, and Jesus went up to Jerusalem. 2 Now in Jerusalem by the sheep gate, there is a pool, which is called in Hebrew, “Bethesda”, having five porches. 3 In these lay a great multitude of those who were sick, blind, lame, or paralyzed, waiting for the moving of the water; 4 for an angel went down at certain times into the pool, and stirred up the water. Whoever stepped in first after the stirring of the water was healed of whatever disease he had. 5 A certain man was there, who had been sick for thirty-eight years. 6 When Jesus saw him lying there, and knew that he had been sick for a long time, he asked him, “Do you want to be made well?” 7 The sick man answered him, “Sir, I have no one to put me into the pool when the water is stirred up, but while I’m coming, another steps down before me.” 8 Jesus said to him, “Arise, take up your mat, and walk.” 9 Immediately, the man was made well, and took up his mat and walked. Now it was the Sabbath on that day. 10 So the Jews said to him who was cured, “It is the Sabbath. It is not lawful for you to carry the mat.” 11 He answered them, “He who made me well, the same said to me, ‘Take up your mat, and walk.’” 12 Then they asked him, “Who is the man who said to you, ‘Take up your mat, and walk’?” 13 But he who was healed didn’t know who it was, for Jesus had withdrawn, a crowd being in the place. 14 Afterward Jesus found him in the temple, and said to him, “Behold, you are made well. Sin no more, so that nothing worse happens to you.” 15 The man went away, and told the Jews that it was Jesus who had made him well.

At St. Catherine's Monastery in the Sinai desert one of the three oldest complete Bibles known was found. This is the Codex Sinaiticus from the early fourth century written in Greek. This manuscript omitted the part about the water being stirred before people entered it to try to get healed. Early explorers in Jerusalem noted that the pool of Siloam was supplied by an intermittent spring and sometimes the water of this pool was troubled by a surge in water flow. Originally Bethesda was supplied by rainwater from winter downpours. This was the only time when the water was likely troubled, unless a ripple was raised by the wind.

Some translations indicated the area of the pools was surrounded by five porticoes; i.e. the NAS translation.